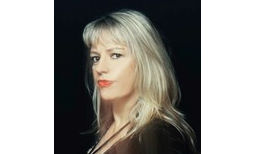 Rebecca Barnard returns to his jazz roots for two performances at Kew Court House, Friday 9 and Saturday September 10. Alongside her is the exceptional Rebecca Barnard Quartet, made up of Barnard’s son, Harry O’Mara on drums, Paul Williamson on saxophone and the extraordinarily talented Monique Dimattina on piano.

These captivating performances will feature original compositions from Barnard’s first solo jazz album, Listening And Relaxation Music, and covers of beloved jazz classics, ranging from Billie Holiday to Louis Armstrong and many more.

Barnard made his stage debut at the age of 13, performing with his father, the acclaimed jazz drummer, Len Barnard.

His rich musical lineage dates back to the 1920s with his grandparents, Jim and Kath Barnard, who led Kath Barnard jazz band. His uncle, Bob Barnard, is also a famous jazz trumpeter.

After spending many years honing her musical abilities in Melbourne, Barnard became an in-demand session singer. This led to her joining Stephen Cummings as a backing vocalist on his recordings and tours over the next ten years.

During this time, Barnard began to focus on his solo career and Rebecca’s Empire was born. After touring Australia extensively, supporting artists such as Billy Bragg and Paul Kelly, and appearing on Triple J Hottest 100 albums three years in a row, the band finally disbanded in 2000.

Barnard continued to provide session vocals on recordings by revered Australian artists including Paul Kelly, Tim Rogers, The Meanies, You Am I and many more, while also making guest appearances on nuggets and specks, rockwiz3RRR, Triple J and ABC.

Rebecca Barnard is delighted to perform at the historic Kew Courthouse in September, continuing her family tradition of a long line of great jazz artists. These shows are an opportunity to enjoy a breathtaking evening of extraordinary music, echoing the vibrant and precious talents of the jazz era.

Formerly a police station and courthouse, Kew Courthouse is a charming heritage building that has been redeveloped into a thriving contemporary cultural center. The venue now offers a unique and intimate performance space with an extraordinary ambience, where some of Australia’s most exciting artists perform.