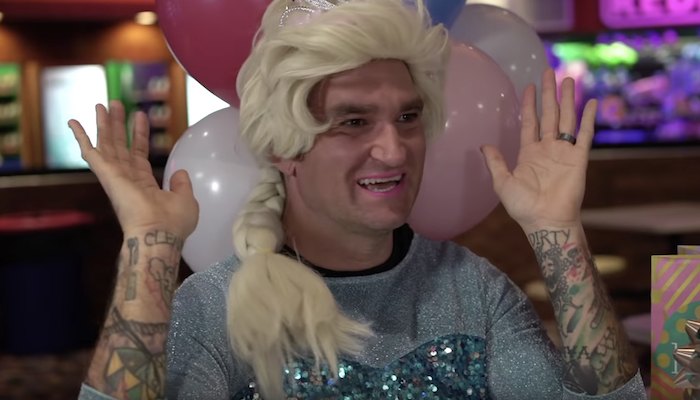 Was there ever a more universally beloved album than disneymania? Since we first heard Aaron Carter and Christina Aguilera, among other famous artists, covering our favorite classics circa 2002, we couldn’t get enough of disney song remakes.

Unsurprisingly, given the longstanding affiliation between Disney and hot topic, alternate versions of our favorite show songs are popping up with increasing frequency since pop stars first appeared on disney channel. From pop punk to metal and everything in between, here are the best covers for your most magical playlists.

As if the original version of Moana through Auli’i Cravalho does not require enough of a singalong, the pop-punk the support makes it downright anthemic. The best part? The lyrics align perfectly with the ‘get me out of this town’ theme we all know and love – only references to pizza and Distorted tour might make it more relevant. Side note: Aren’t those carefree seagulls standing in the backdrop of the performance the most Disney thing you’ve ever seen?

Jonathan Young – “Fire From Hell” (The Hunchback of Notre Dame)

Petition to support all Disney villains with metal leads in the future because this rendition of Tony Jay’s original The Hunchback of Notre Dame is nothing if not visceral. This is hardly a surprise coming from Jonathan Young, however, whose long list of covers ranges from Disney to the Skyrim “Dragonborn” theme and includes rock, pop punk and metal varieties. (If you’ve ever wished for a hardcore version of “The greatest show,” It is do that too.)

There are countless variations of Idina Menzelit is Frozen power ballad floating on the internet. It’s just the most streamed Disney song on Spotify. But we would be remiss not to recognize New found glory‘s spin like a star. If translating a show tune to something befitting a classic pop-punk album isn’t impressive enough, their ability to perform on roller skates and princess dresses is certainly worth acknowledging. You can’t say these guys do anything halfway.

Dreamhouse – “Part of your world” (The little Mermaid)

If there’s one Disney princess worthy of being an alternate girl, it’s Ariel’s The little Mermaid. Bright red hair and teenage angst aside, she has the right kind of energy. It’s no wonder that Dream housethe rock adaptation of his soulful number, originally voiced by Jodi Benson, feels like a natural – and perhaps even more emotive – extension to that. If you like this variation, be sure to check out the entire ghost killer entertainmentit is Disney goes hardcore collection.

What’s better than a metal Disney blanket? Six seamlessly blended Disney metallic covers, including the likes of “Bibbidi-Bobbidi-Boo” and “Winnie the Pooh.” This track diverges a little from the others on the list in that it’s part of an official Disney-sanctioned album, but don’t think that makes it any less outlandish. If you’re a fan of this little sampler, do yourself a favor and listen to the rest of the Disney Metal album for heavy spins on “Mickey Mouse March”, “Under The Sea” and more.

You wouldn’t expect ska go with Pocahontas, not to mention what is arguably the most moving song in the film, but suburban legends successfully adding danceable energy while retaining the heart behind Judy Kuhn’s original version. Other covers on their EP Dreams Aren’t Real, But These Songs Are, Vol. 1 are less stunning in comparison, such as “Kiss The Girl” and “You’ve Got A Friend In Me”.

PelleK – “Be Prepared” (The Lion King)

If the Jeremy Irons the original was not your favorite song The Lion King, did you really have one emo phase? PelleK beautifully develops this menacing call to action, pairing deep, theatrical vocals with a metal accompaniment that’s sure to send shivers down your spine. But if his performance as Scar isn’t enough to blow your mind, just wait until he starts going in and out of hyena parts. Really, it’s a wonder he hasn’t made an appearance on Broadway yet.

The Vandals – “Heigh-Ho” (White as snow)

This song has been stuck in our heads since 1937, so it’s no surprise that it’s so well suited to a high-energy punk cover. Vandals‘ the rendition employs an air of aggression that turns the show’s charming melody into something more reminiscent of the plight of the working class, which is painfully relevant for 2020. With live action White as snow expected in 2022, we can only hope dwarfs take a similar advantage.

Caleb Hyles – “The Crowd’s Song” (The beauty and the Beast)

It shouldn’t be so easy to line up with an angry mob bent on bringing down our beloved beast. Corn Caleb Hyles puts a raging spin on this already grim ensemble piece of The beauty and the Beast. As perfect as the 2017 live-action flick is, this performance leaves us wishing for a modern remake following a group of punk kids as they hunt down the town monster. Or is it too close to stranger things? If you want more, watch him star as LeFou alongside Jonathan Young in a “Gaston” duo.

Let’s go back to our vision of Ariel as a poster of a modern alternative girl because Kimmi smiles turned this classic into a pop-punk daydream as danceable as it is reminiscent of our favorite 2008 albums. If the song itself doesn’t leave you feeling peppy and happy for the rest of the day, we’ll dare you to watch the music video and not be overwhelmed by warm fuzzy feelings.