Harry Styles belongs to the modern rock canon. There, I said it. 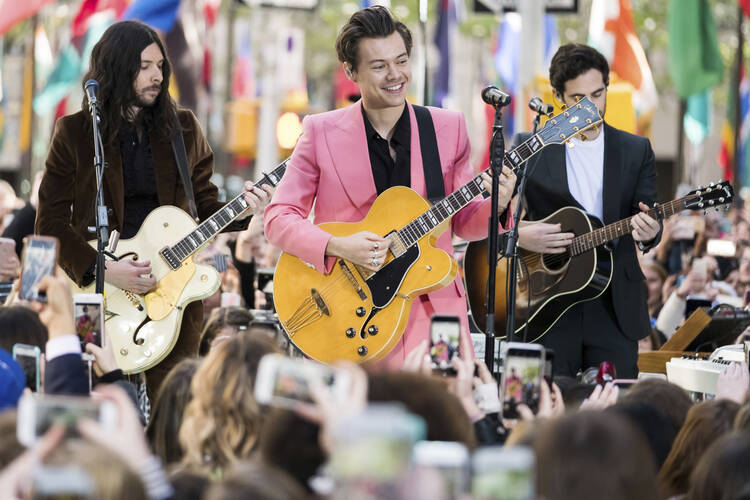 Harry Styles belongs to the modern rock canon. There, I said it.

“Harry Styles Could Save Rock” read the headline on the cover of the morning paper. I rolled my eyes while muttering a swear word about the state of music today. I ignored the rest of the article, grabbed my keys and headed out the door to work. Calling myself a bit of a musical snob would be accurate. To call myself a style skeptic would be an understatement.

Later that week, a few friends, mostly pop music aficionados, posted screenshots of the album with heart-eyed emojis on Instagram. Since they’re the kind of friends in their thirties who are known to stand alongside 14-year-olds at a One Direction concert and yell, “MARRY ME, HARRY!” I remained impassive.

It wasn’t until the darkness before dawn, on my way to the gym, that I gave in. After all, 4:45 a.m. in a half-empty gym is as good a time and place as any to listen to new music, no matter how bad. My workout playlists tend to be pretty eclectic: NPR podcasts alongside Nicki Minaj’s “Pink Print,” show tunes “Dear Evan Hansen” by old Kanye and South American rap, “Coming Home” by Leon Bridges mixed with a dash of Gregorian chant. (Nothing helps portray spiritual angst quite like trying to max out your leg press with an abbey full of monks singing into your ears at full volume!) dudes in bro tanks means mugging the mirror, isn’t it not?

So while I wait for the tan guy in front of me to leave the squat rack, I check out Styles’ album on Spotify. I’m not expecting much, at best I hope some One Direction style bubbly pop earworms will get me through my workout. To say I was blown away by the 10 songs that followed doesn’t do justice to the 23-year-old’s self-titled debut solo album. Not the least.

The lead track, “The Sign of the Times”, immediately got me listening closer. I fell into this slow motion, hijacked by something awesome, where everything around you slows down, like driving through a city and seeing an amazing mural out of the corner of your eye. I sat up and listened closer, turning my headphones to hear the intricate intertwining of emotional honesty and convincing guitar stabs. When the second song, “Sweet Creature”, started, I knew it was something special: Sweet creature/ When I’m out of rope, you take me home/ You take me home.

“Harry Styles” has a soft 70s space rock feel, but with enough of its own vibe to stand alone alongside contemporary rock flame keepers like Dan Auerbach, Father John Misty, Ryan Adams and Jack White . The album avoids the pitfalls to which many boy bands who have become soloists have succumbed. There is no reference to clubs or private planes. No crossover genre artists were featured to increase sales with any group outside of their own supporters. There are no remixed covers that spoil the good songs written by people more talented than him. He doesn’t try to do too much. The album comes across as emotionally authentic and incredibly honest.

There remains an album just as tender and raw as the album cover illustrates. The image of a naked Styles in a bathtub filled with rose water is gripping, evoking grief or overdose, literally dripping with pain and vulnerability. The songs display a dizzying diversity of style and composition. It begins with the otherworldly, Queen-inspired ‘Sign of the Times’. Then it goes from summer jam rock “Carolina” to hard rock “Kiwi”. The theme of sifting through the ashes of a painful relationship pervades. You feel like a hangover and self-medicating Styles is alone in a hotel room not knowing what to do with his day as a result of the relationship that has been. I just left your room / Give me some morphine / Is there anything else to do?

“Harry Styles” is a welcome addition to the modern rock canon, filled with courage and certainty that invites the listener into their pain without burying your face in it. This album is so compelling and so well done that it made me realize that Harry Styles wasn’t becoming a rock star while I was lifting weights – he always was.

I’m sorry I growled and assaulted you when I heard your name said out loud earlier. You deserve all the accolades that are undoubtedly yours for this impressive and far-reaching album. If you happen to find yourself in a cheap gym in Milwaukee before sunrise, I’d love to treat you to a shot of wheatgrass.