Poco’s Paul Cotton belongs to the pantheon of classic rock 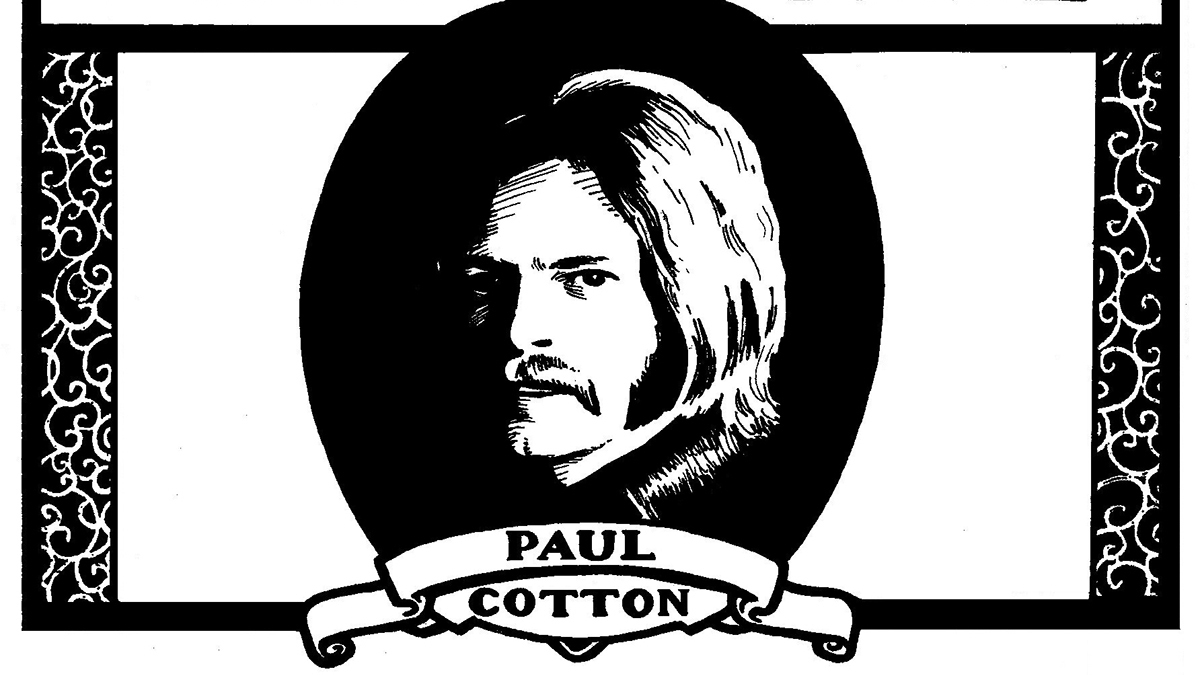 Poco’s Paul Cotton belongs to the pantheon of classic rock

Since 2004, Plastic Crimewave (aka Steve Krakow) has used the secret history of Chicago music to shine a light on valuable artists with Chicago ties who were overlooked, underappreciated, or never noticed in the first place.

Paul Cotton, best known as a crucial member of country rockers Poco, died a year ago this month, and it was easy to miss the news amid all the chaos in the world, let alone everyone else celebrity deaths taking up bandwidth. (His fellow Poco Rusty Young, for example, had passed away in April.) Poco doesn’t seem to have much cool cachet either, and these days their records are usually relegated to dollar bins. They need to be seriously re-evaluated though, and I think that should put them (and Cotton) firmly at the forefront of the classic rock pantheon.

Poco’s sound puts them close to Neil Young, Stephen Stills and Joe Walsh, and Cotton wrote some of their most beloved songs, but he appreciates nothing like name recognition from these artists. In an August 2021 interview with online publication Rock & Roll Globe, Poco co-founder Richie Furay praised his friend. “Musically, Paul was the complete package,” he said. “Great singer, exceptional songwriter and what a guitarist.”

Norman Paul Cotton was born on February 26, 1943, in Fort Rucker, Alabama, but he considered Illinois his home. Cotton was the eldest of five children; his father owned a chain of grocery stores and his mother kept the books. Always known as Norm, he started playing guitar at age 13. At age 16, the Cotton family moved to Harvey, Illinois, where he attended Thornton Township High School.

In Thornton Township, Cotton soon launched his first instrumental group, the Capitols (not the Capitols famous for “Cool Jerk”). In 1961, the band became the Mus-Twangs, who released a few surfy singles that were picked up for national distribution by Mercury subsidiary Smash Records. Cotton then jammed with the Starfires (not the more well-known Los Angeles or Cleveland Starfires, obviously), the Carol Vega Trio, and the Gentrys (not the “Keep on Dancing” Gentrys).

In addition to Cotton on guitar and vocals, the Gentrys featured Kal David on guitar and Fred Page on drums. David and Page had played in popular local band The Exceptions with a young Peter Cetera on vocals. After learning about the other Gentrys, they changed their name to Rovin’ Kind, and in the mid-60s released several excellent singles on the Contrapoint, Roulette and Dunwich labels.

The hardworking band played five nights a week at Buster’s, at one point alternating bookings with soul god Baby Huey. They won a local battle of bands led by Dick Clark, earning them a spot in August 1966 on American bandstand– and James Brown appeared in the same episode. After traveling to Los Angeles to shoot the show, the band stayed out west for a while, performing along the coast. When they returned home in 1967, they opened for artists as diverse as Paul Revere & the Raiders and Little Richard.

Bassist Frank Bartell left Rovin’ Kind soon after, replaced by Keith Anderson, who had started playing with Cotton during the Capitols days. The new lineup played a major gig in 1968 at the Chicago outpost of the Whiskey A-Go-Go club franchise. In the audience was producer James William Guercio, who soon signed the Rovin’ Kind to Columbia Records.

Guercio advised the band to move to Los Angeles and change their name, so they became the Illinois Speed ​​Press (and Cotton started calling themselves “Paul”, not “Norm”). Around the same time, Columbia began working with several other Chicago bands, marketing them together as “Chicago Sound”. They included psychedelic band Aorta, brass rockers The Flock, and a small group called the Chicago Transit Authority that had also moved west. (They were once called The Big Thing, and later became simply “Chicago.”)

The Illinois Speed ​​Press became an outlet for Cotton’s original and even groundbreaking tunes. “Get in the Wind,” the only single from their 1969 self-titled debut album, is fiery rocker with two tracks to be reckoned with, and it received national airplay. The track contrasts nicely with another Cotton composition on the album, “Here Today,” a mellow earworm that shows off his nasal baritone vocals and acoustic guitar chops.

Tradition has it that a fledgling Lynyrd Skynyrd loved the soul, blues-rock, and country elements of that Illinois Speed ​​Press debut album so much that they memorized the entire record and could play every song. This gives ISP the claim to be at the origin of what we would eventually call “southern rock”. The album reached number 144 on the charts, and it clearly made an impact. Prior to its recording, however, Guercio had fired Anderson, and prior to its release he had canned all the other band members except Cotton and David.

ISP’s second album, released in 1970, was aptly titled Duo, with Cotton and David aided by session musicians. Cotton’s songwriting and songs evolved further, evident in the mournful harmonies of “Sadly Out of Place”, the searing American march of “Seventeen Days” and the ambitious four-part string-adorned suite “Dearly”. . Before the end of that year, however, David left the Illinois Speed ​​Press to join a supergroup of sorts, the Fabulous Rhinestones, and Cotton joined Poco.

As Cotton recounts, the Illinois Speed ​​Press had a gig with Poco near Disneyland, and he made a big impression. “We were both down to four at the time, like we were both on our last legs, you could say,” he told the New Times Broward – Palm Beach. “Something about me stuck with them, and a month later Richie Furay called me and said, ‘Why don’t you come over to the house?’ So not only did I come, but I brought my guitar, and we just clicked in. Next thing I knew, we were there, playing in front of Neil Young at the Fillmore West.

Poco had just lost guitarist and founding member Jim Messina, so Cotton had the opportunity to help reshape their sound. “They’ve always been labeled too country for rock and too rock for country, so we’ve always tried to find that happy medium,” he said. “They really wanted to rock more, and I definitely brought that energy to them.”

Cotton first appeared on Poco’s third album, in 1971 Inside, where he contributed a few tunes. They include the roots rock of “Railroad Days” and the pedal steel country of “Bad Weather.”

“I did ‘Bad Weather’ with the band at the Whiskey in LA, and after our set, I walked down the steps on the way to our dressing room and Jimi Hendrix grabbed me on the dance floor and made me a big bear hug,” Cotton said. New Times Broward – Palm Beach. “He said, ‘Paul, never stop writing songs like that.’ It was big!”

Poco’s fourth studio album, the 1972 release It’s a good feeling to know, which is where I think Cotton may have hit his zenith as a songwriter and performer. It spans the six-plus-minute “Ride the Country” groove, and I’m absolutely obsessed with its soulful, melancholic tune “Early Times.” This should-be-massive song sends shivers down my spine, and its emotive singing surpasses anything Poco’s premier country-rock competition, the Eagles (to whom Poco contributed members Randy Meisner and later Timothy B. Schmit) .

Cotton became increasingly essential for Poco, penning the western shuffle “Blue Water” and searing blooze “A Right Along” for the 1973s. crazy eyes as well as the Neil Young-ish “Western Waterloo” for 1974 Cantamos. The prolific group was entering a relatively commercial period, and Cotton stayed on board: he wrote classics for LPs Poco 7 (1974), Crazy in Love (’75), Cimarron Rose (’76), Indian summer (’77), and Legend (’78). His song “Heart of the Night”, from the last of these albums, charted at number 20.

The band took a brief hiatus in the late ’70s, but Cotton stuck around to have songs on every ’80s Poco LP studio, starting with the title track (and three other tracks) from the ’80s. under the gun and ending four albums later with five cuts on 1984 Inamorata. Cotton left Poco in 1987, joined in the early 90s, then parted ways again to enter semi-retirement in 2010.

Cotton had started a solo career in 1990 with the album change horse, and he released several other solo albums throughout the 2000s while performing occasionally with the Paul Cotton Band. In 2009, a few years after Cotton moved to Key West, he and David reunited for a few shows under the name Illinois Speed ​​Press – wish I could have seen that.

Cotton died suddenly at his summer home near Eugene, Oregon on July 31, 2021, at the age of 78. He left behind a giant musical legacy, as well as his wife, Caroline; his sons, Chris and James; two brothers, David and Robert; two sisters, Carol and Colleen; and a grandson.

The radio version of Secret History of Chicago Music airs on outside the loop on WGN Radio 720 AM, Saturdays at 5 a.m. with host Mike Stephen. Past shows are archived here.