Reggae rock bands perform at a house party – The Orion 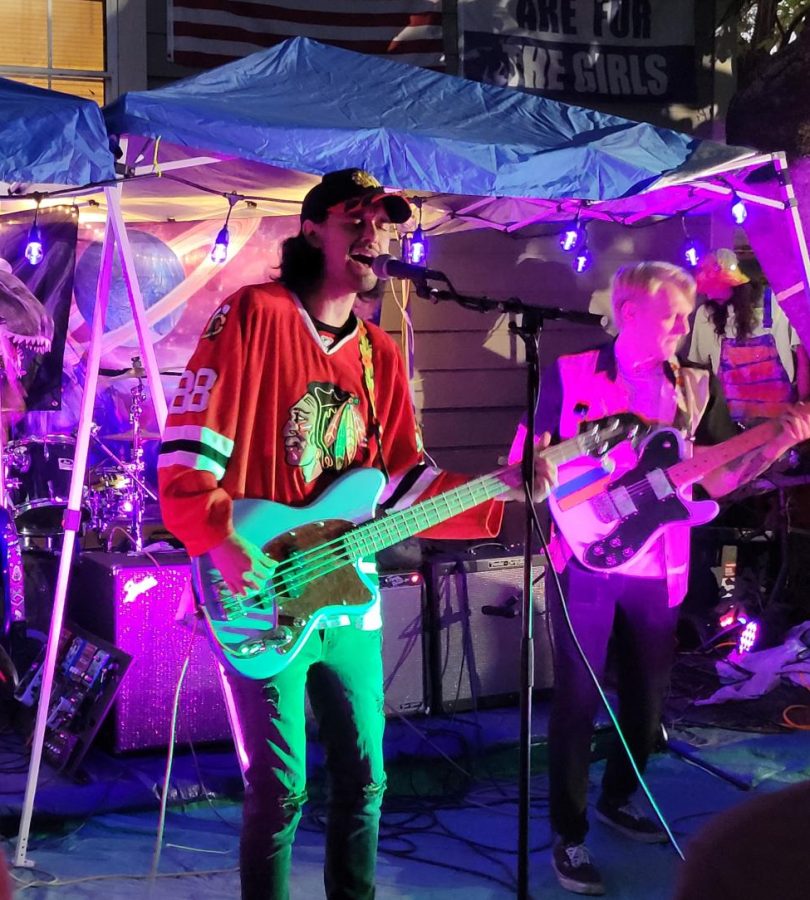 Reggae rock bands perform at a house party – The Orion

Prisbros performing at the House Show. Photo by Sam Kyes.

If you were anywhere on W. Seventh Street on September 23, you could probably hear the booming sound of reggae rock all the way down the street. Behind a house, a stage has been set up with colored lights and large psychedelic colored flags hanging in the background.

A backyard turned into a concert stage as three bands played music that was a mix of fusion reggae and rock in front of a packed crowd.

The “House Show,” as it was called, featured performances by PrisBros, Blu Egyptian, and Jamm. They performed a mix of covers, as well as original songs.

The first band to open was PrisBros, consisting of Ryan King, Israel De Dios, and Alexis Carvajal, who performed music from many well-known bands such as Green Day, Blink 182, and others. King, the lead singer, began by bringing the crowd – which was only a few groups of people at this point – closer to the stage.

The crowd was moving, dancing and headbanging to the music. They sang along with some of the lyrics, especially the last song, “I Miss You” by Blink 182.

As day turned to night and the garden became much fuller, Blu Egyptian took center stage. Band mates Don Jules, Cam Fuller, Zach Graham and Neo Spectrum were just as excited to be there as the crowd.

“Wow, there are so many fucking people here! It’s great,” said Jules.

A standout moment was when bandmate Neo Spectrum went to town fiddling during the show. He and Jules, the lead singer, even danced with each other in perfect sync. It was a sight to behold.

Finally, to close it all, Jamm, a group made up of Anthony Coseo, Matt Crocco, Ian McIssac and David R. Bygum. They played late into the night in front of a crowd of people delighted to hear their music. They did a cover of “Roxanne” by The Police to start things off and started doing mostly original songs.

The crowd was largely made up of college-aged kids who smoked, drank and danced to the three bands.

If you are a fan of this type of music and would like to hear what Taken Bros, Egyptian Blue and Jam have to offer, you can check out the links provided. Their music is also available on Spotify and Apple Music.

Sam Kyes can be reached at [email protected]