Wishbone Ash’s US tour will kick off February 23 and run through May 24. The tour, with stops in the Northeast/Midwest and South/West, will continue the band’s 50th anniversary celebrations and also mark the golden anniversary of their seminal album, Argus.

“Fortunately, before Covid-19 shut down live music around the world, we managed to celebrate our 50th anniversary by touring Europe and other territories in support of our new album, ‘Coat of Arms'” , says founding member Andy Powell (guitar, lead vocals). “The United States wasn’t so lucky they missed the party, so we’ll be resuming the celebration for our friends and fans who missed out due to the pandemic.”

Argus (1972), their third double platinum album, is intertwined with witty imagery, featuring classics such as ‘The King Will Come’, ‘Throw Down the Sword’ and ‘Blowin’ Free’ – all three are still must-haves from Wishbone Ash. regular concerts. The iconic album cover design is one of the legendary works of Hipgnosis – a sentinel watching over a misty landscape – encapsulating the title of the album, which was taken from the one-eyed watcher of Greek mythology.

To commemorate Argus’ 50th anniversary, the band will perform the album in its entirety at select shows on the tour.

Slated for release later this year is a special limited-release Argus box set containing the remastered album as well as historic, previously unreleased live albums from the original band, at the time.

The quintessential road band, Wishbone Ash have achieved worldwide recognition, firmly based on a regimen of relentless touring and recording. The power and melody made Ash a hard act to follow, as they are currently being discovered by new generations of loyal rock fans.

Powell exchanges licks with Yorkshire’s Mark Abrahams, who has been playing Wishbone Ash tunes since he was young. Bob Skeat keeps the rock low end, working the grooves with new band member Mike Truscott on drums. Mike is also from Yorkshire, England, like Mark Abrahams.

In the past few years alone, tours have taken place in North America, Europe and the UK, as well as Japan and South Africa. Each year, approximately 30,000 actual road miles are accumulated, along with countless flights, taking the band’s special brand of double-guitar-based rock around the planet.

“Everyone now knows that Wishbone Ash are one of the hardest working rock bands today and so it was a real blow to be ripped out of our comfort zone – to be on tour” , Powell said. “A lot of personal, financial and physical adjustments went into taking this enforced break, for all of us, but we got busy. I worked on my gear and worked on songs. I also launched my site in line patreon.com/andypowell where I dispense road stories, guitar tips and songwriting ideas This kind of thing has kept us individually focused and creative, but there’s nothing like only a lifetime on the road, especially if you’ve been living this way for 50 years!

Their last concert in the United States was at the Triple Door in Seattle on Friday the 13th 2020. “I looked like a tightly sealed passenger when I boarded the plane home”, says Powell. “We were getting updates on the Covid situation from authorities as we rounded the corner through California and Washington State, the virus seemed to be on our heels. After that, the whole world seemed to stop and we had to make some major adjustments. In fact, we miss all of our friends and fans in the United States and around the world, and the camaraderie and support it brings.

These two stages of the American tour will prove to be sweet reunions. 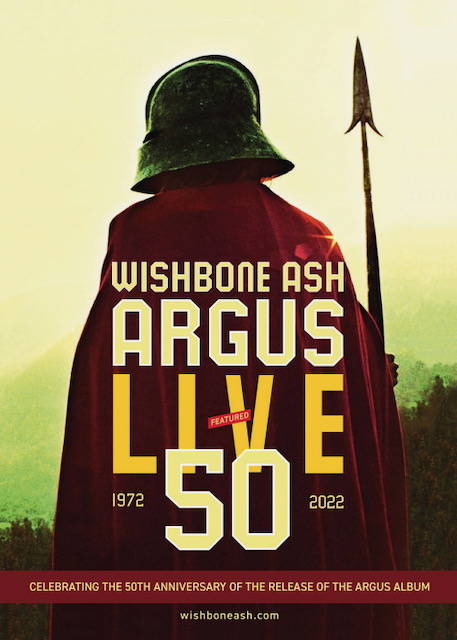 * Performs the Argus album in its entirety